38. Excavations on the Battlefield

In 2012 test pits and a trial trench were excavated on the north-western side of the registered battlefield. This was centred on Field 19, but also extended north into Field 12, and east into Field 15.

Investigation of Field 19 was prompted by a report, in 1810, of an apparent mass grave found during drainage work. The supposed findspot is marked on the 1860 Ordnance Survey 6” map, captioned ‘Large Pit of Human Bones & Leaden Cannon Ball found’. This is HER site 751 described as ‘Possible mass grave site, Battle of Flodden’. 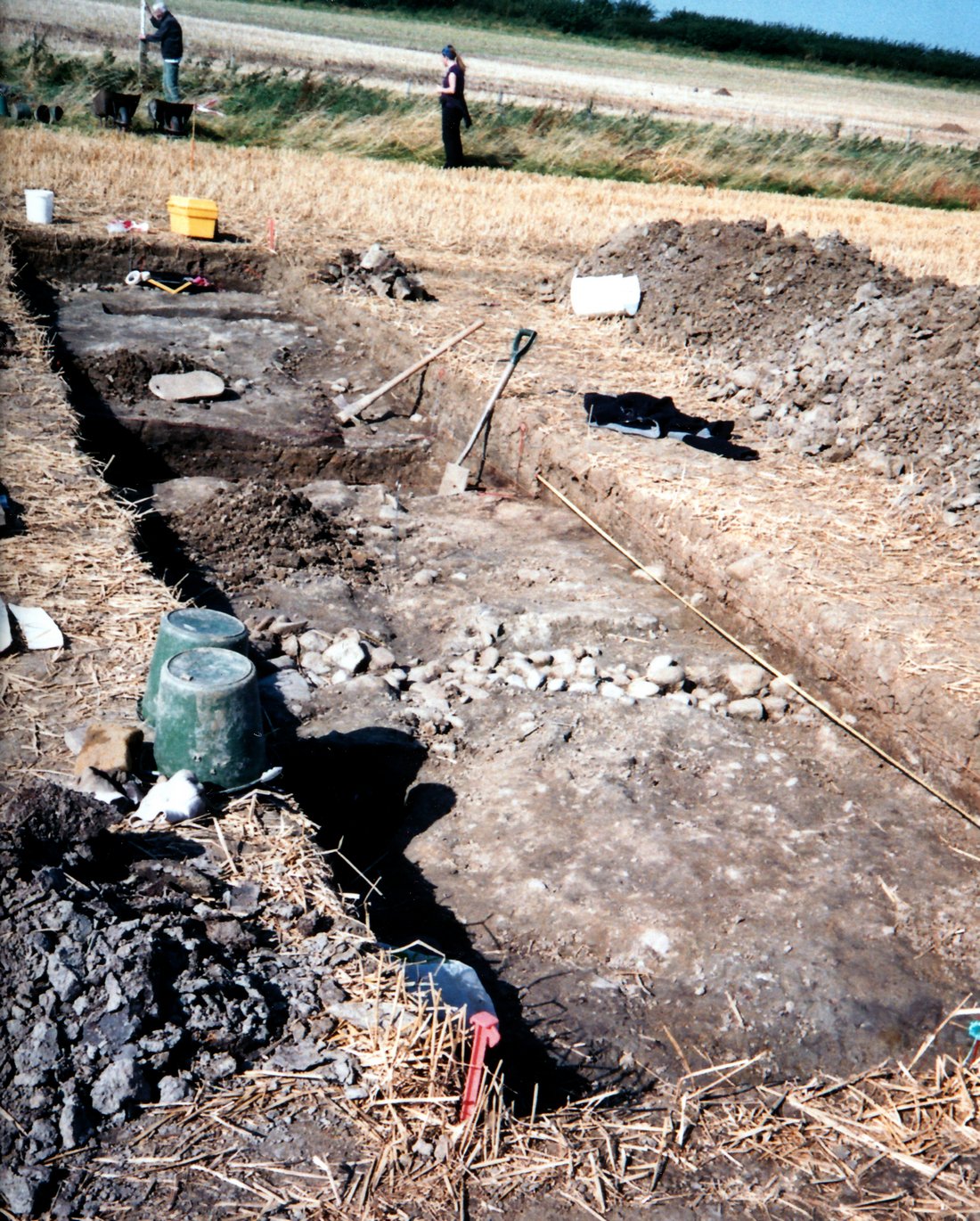 Trench 1 showing one of the field drains, looking north © Maureen CharltonFurther reason for investigation was provided by the discovery of two lead composite cannonballs during metal-detecting by Glenn Foard and team in 2007, on the eastern edge of the field, and an object initially said to be a royal livery badge (subsequently identified as part of a later 17thearly 18th century bridle-boss) which was found during fieldwalking in 2011. The test pitting exercise was to ‘test whether it was possible to locate the battle line’.

At the time of the archaeological investigations, farm drainage works were also carried out in an area adjacent to the track leading to Branxton Steads and Branxton Hill Farm. These were monitored by volunteers, and a significant depth of overburden was noted. It was rumoured that a quantity of soil had been imported and spread on the field (it has so far proved impossible to verify this).

Some of the survey data was not available and as a consequence a number of the test-pits could not be accurately positioned on the plan. 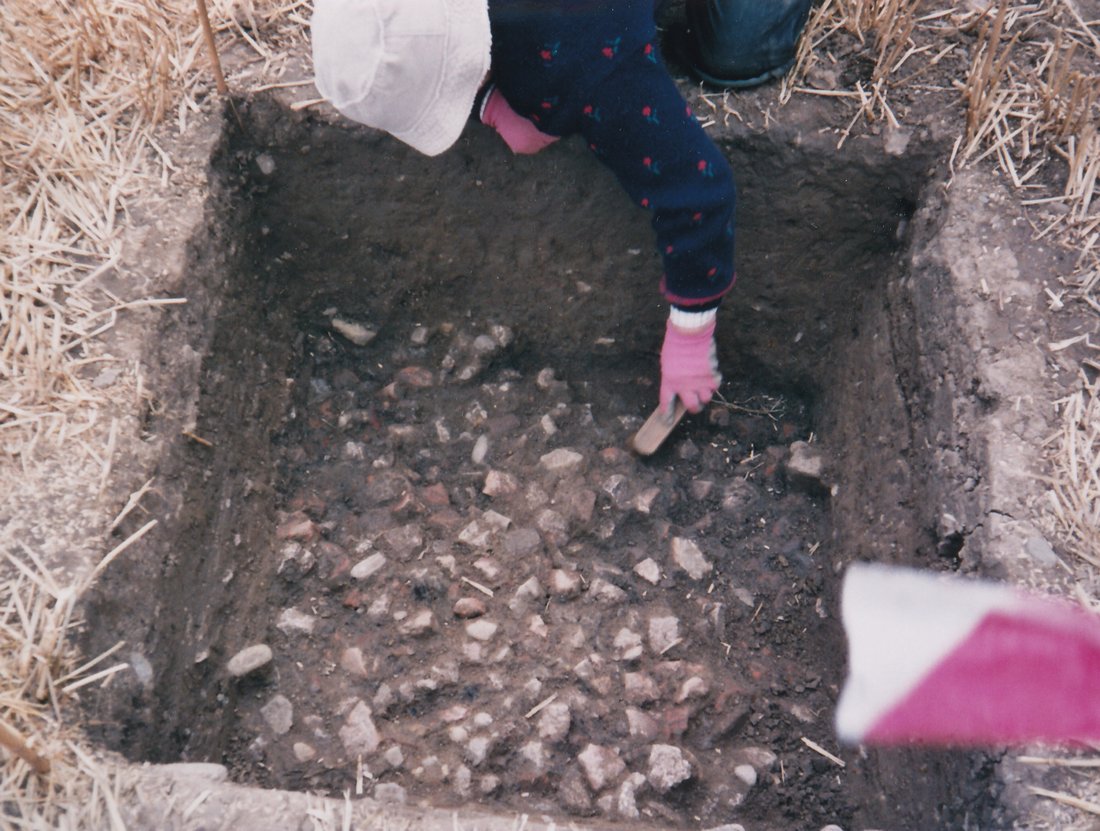 Test Pit 8: ‘cobbled’ surface with signs of occupation dated to late Neolithic/early Bronze Age © Maureen CharltonNo body pit or human bone was found. Field drains of the ‘rumbler’ type (i.e. filled with stones) were found in Trench 1 with one running north/south joined by another running east/west (right). Two other possible drains were also recorded. Other linears were perhaps deep plough grooves. The presence of waterlogged wood is indicative of marshy ground with scrubby vegetation.

Field drains were also found in a few of the test pits. There was evidence, pieces of chipped flint, chert and quartz, in rather more for prehistoric activity. A sample from one was sent for C14 dating and produced a date of 2143 -1972BC (right).

In another test pit (22) a series of ten close-packed possible post-holes cut the subsoil. It was initially suggested that these represented stakes surrounding an English archer’s ‘stance’ since the angle of some of the holes suggested stakes pointing southwards towards the Branxton Hill ridge. Decomposed wood recovered from the features was identified by Jacqui Huntley (English Heritage’s Science Advisor North East) as alder. She suggested it could be the remains of growing trees or from stakes, though said that alder is not commonly used for stakes or posts. The condition of the wood rendered it unsuitable for dating. 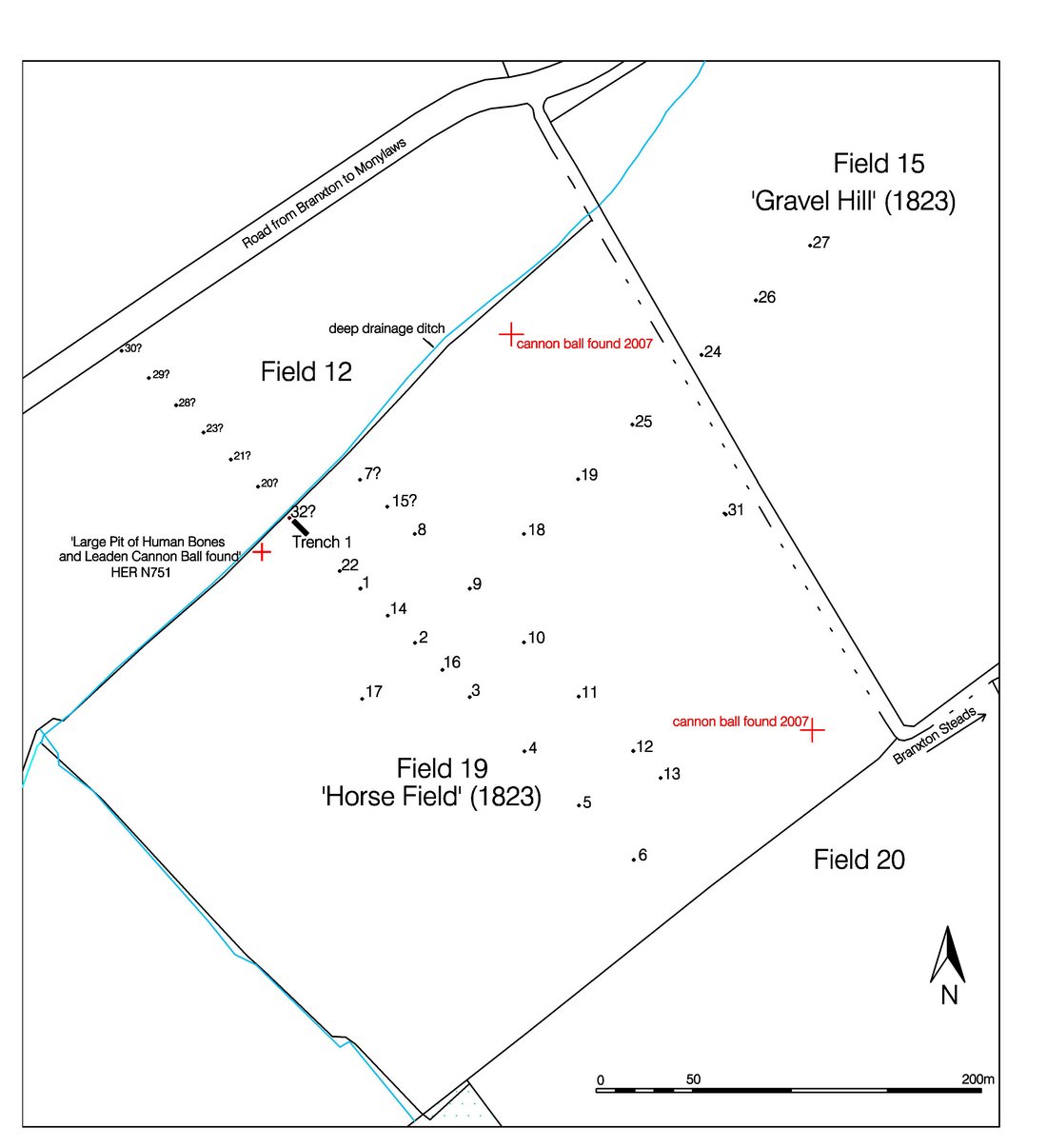 Apart from the chipped stone mentioned above, a piece of degraded possible prehistoric pottery, a fragment of medieval pottery (from Trench 1) and a piece of Cistercian type ware (16th century) all other finds were later post-medieval (i.e.18th century onwards). Nothing which could be related to the battle of Flodden was found.

The lack of evidence for a burial pit need not be conclusive as when Trench 1 and TP 32 (the closest to the drainage ditch) were plotted according to the available survey data they appeared to be some 25m east of the Ordnance Survey location. This however, is open to question.

‘As Sir Carnaby Haggerston’s workmen were digging in Flodden Field, in 1810, they came to a pit filled with human bones, which seemed of great extent; but, alarmed at the sight, they immediately filled up the excavation, and proceeded no farther.’

The story is reprinted almost verbatim in Richardson’s Borderer’s Table Book (1846) giving the source as ‘Local Papers’. The original report cannot be traced in any of the principal newspapers of the time.

In 1858 when the Society of Antiquaries of Newcastle upon Tyne made a trip to the battlefield, they were introduced by the vicar of Branxton, the Rev. Jones, to the churchwarden, Andrew Rankin, who was named as the finder. Rankin said that when the discovery was made he had been working for Henry Collingwood, owner of Branxton Hill, and not Haggerston. He stated that the discovery, the date of which later appeared in the report on the visit (Archaeologia Aeliana,1859) as 1818, was made while making drains, and that the ‘trench’ was “intersected from east to west...[and] ...was as wide as the turnpike road where they were standing”

Rankin pointed out the findspot which the Society’s report states as being four fields to the west of the road where they were standing (apparently just outside the vicarage), in a field called the Horse Close. This description seems to have influenced the Ordnance Surveyors (see above) who marked the find spot in Field 19, precisely four fields due west of the vicarage road. The description implies that a cannon ball was directly associated with the bones. In the Rev. Jones account of the battle, published 1864, he reports that a lead cannonball ‘in the possession of John Collingwood Esq. of Cornhill House’ had been found during his incumbency

‘near the spot where such a number of bones were found about forty years ago by Mr. Rankin’. So a cannonball was not directly associated with the finding of the pit of human bones. The Rev. Jones produced his own map which marked the ‘pit of bones’. Although this is only a sketchplan the find-spot indicated is clearly a considerable distance south of the Branxton-Moneylaws road.

An estate plan of 1823 calls Field 19 the ‘Horse Field’, not ‘Horse Close’. A field called ‘Horse Close’ appears on an 1848 estate plan of Branxton Buildings Estate (owned by Haggerston). Depending on how the field boundaries are counted this could be construed as lying four fields broadly ‘west’ of the vicarage. The field lies on the boundary of Haggerston’s estate with Collingwood’s. Confusion over which landowner had undertaken drainage operations along this boundary could easily have arisen, and it is possible that this field is the actual site of the bone pit. It was not part of the investigations and lies beyond the designated battlefield boundary.

In June 1912 The Antiquary reported the discovery of a large number of bones two feet below ground level, and within 250 yards of the recently erected memorial on ‘Piper’s Hill’. The find seems to have been made by workmen laying waterpipes from the spring west of Branxton Hill farm to Pallinsburn House. The bones, which were identified as human, were apparently closely packed, giving the impression that the bodies had been buried one on top of the other. The actual quantity of the remains is unclear, the report mentioning just three skulls – all of which ‘crumbled to pieces’. There is no further published record. As with many other ‘reports’ of battlefield finds, there is no first-hand record – in 1912 one might have even expected a photograph – and no physical remains. The story has subsequently been embroidered:

‘oral tradition holds estate workers...encountered a pit filled with swords and skulls and that the pipe was re-routed around the pit to avoid disturbing it’ (Burgess 2013, 2).

The site is designated in the HER 24248 as ‘Possible mass grave, Battle of Flodden’ .The HER notes the evidence base as ‘conjectural’ and ‘oral’. A geophysical survey, using Ground Penetrating Radar, just prior to the excavation located a large negative anomaly (a pit) with a linear feature running into it, possibly evidence for the re-routing of the pipeline. 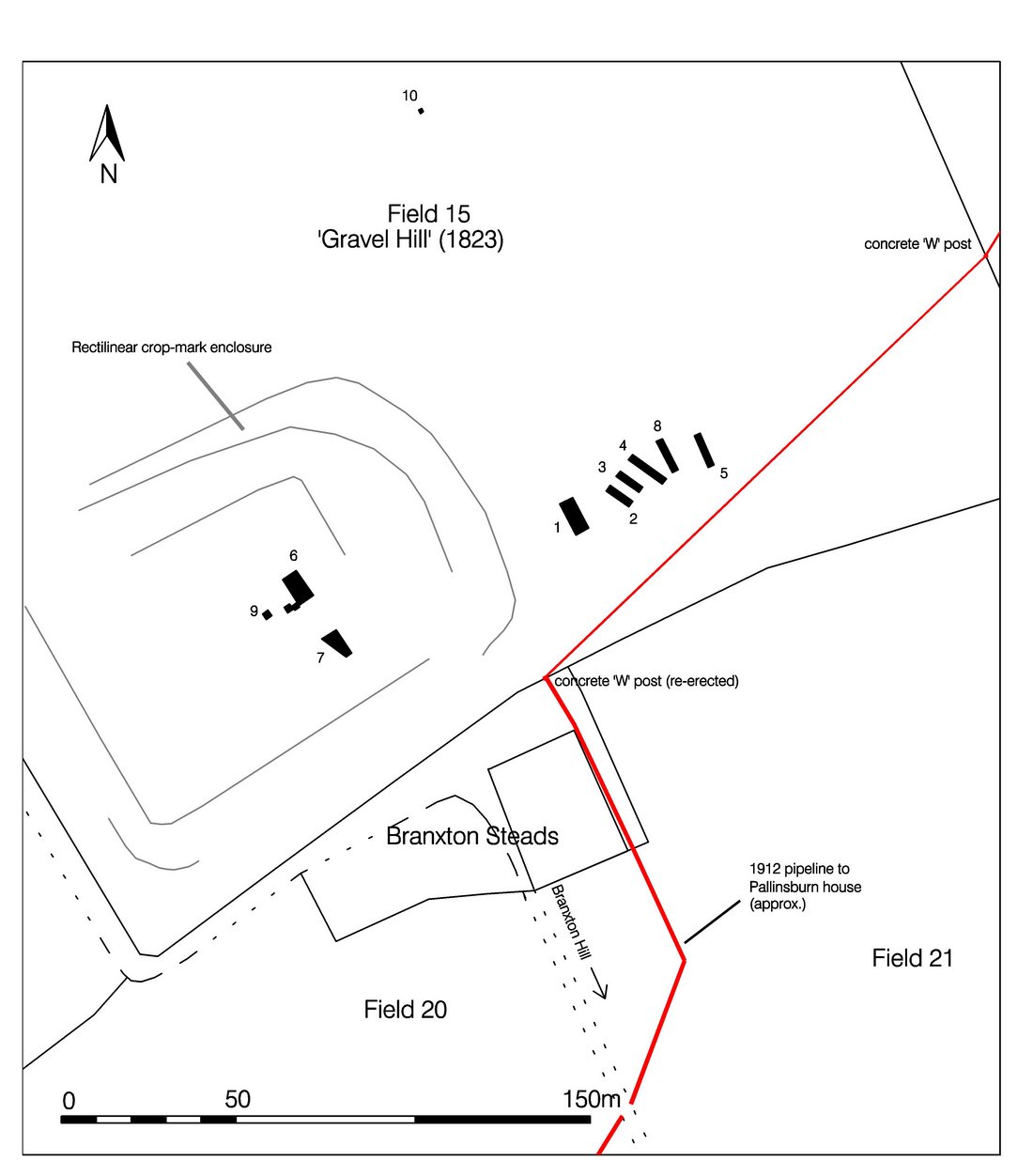 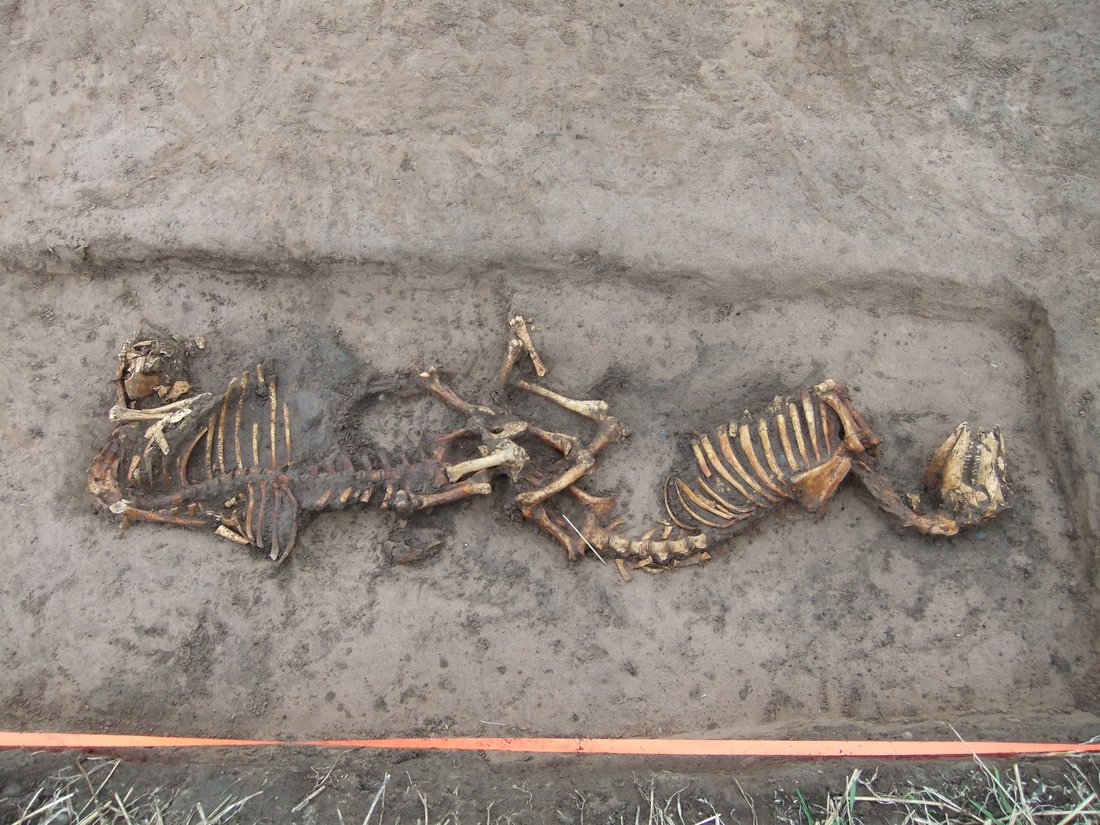 Initially five trenches were proposed to examine the possible burial pit and abandoned pipe trench. Results were disappointing and to accommodate the high turn-out of volunteer excavators three additional areas were opened, two of them (trenches 6 and 7) over the knoll in the south-west corner of the field, where aerial photographs showed the faint outline of a double-ditched rectilinear enclosure. A further two test pits were also excavated.

None of the trenches revealed any evidence for either a mass grave or an abandoned water-pipe trench. The geophysical anomalies were apparently geological. Three of the trenches contained ceramic field drains. Several livestock burials were found in Trench 6. These are probably connected to Branxton Buildings, the abandoned farm steading just south of the field. A number of pieces of chipped stone were recovered including two flint scrapers and a chert core. Such evidence for prehistoric activity has been found in almost all the fields walked and all the excavations. The only possible prehistoric feature in Field 15 was a pit or post-hole in Trench 1. It contained a possible hammerstone and a whetstone. A sample taken from the charcoal-rich fill was not considered viable for dating.

The points at which the water-pipe crosses the hedge-lines are marked by posts (with impressed ‘W’) so its course as laid across Fields 15, 7 and 22 can be plotted. The 1912 account does not mention any re-routing to avoid the bones and its wording implies that the find-spot was in fact in Field 7, and broadly between the Monument and the Vicarage. This appears to be equatable with HER ID 752 ‘Possible mass grave, Battle of Flodden’, though it is described in the HER as the site of two pits, and the date is given as 1910, perhaps arising from confusion with the 1810 discovery.

The published report on the ‘Two Men in a Trench’ excavations in Field 7 in 2001 states that ‘at one point we narrowly missed breaking a waterpipe with the JCB bucket’ (Pollard and Oliver, 164). Their trenches were south-east of the Monument although unfortunately there is no exact location for the ‘near miss’. However, it seems probable that this was the 1912 Pallinsburn pipe. The ‘Two men’ also refer to sheep skeletons being found (ibid, 165) in Field 7. It is impossible to be certain that the bones found in 1912 were in fact human. There may have been an initial misidentification, and the apparent lack of the further investigations (mentioned in the Antiquary as being proposed in the autumn) or any other record was to avoid embarrassment!

If the bones were human, and if the later oral tradition of ‘swords’ being found with the skulls is discounted (it seems highly unlikely re-usable weapons would have been buried with the dead), the remains need not be related to the battle. The high ground now called ‘Piper’s Hill’ may have been a manorial gallows site and the bones those of medieval criminals, or even from a prehistoric cist disturbed by ploughing.

It is worth noting here that the name ‘Piper’s Hill’ derives from a statement in Stow’s Annales (1580) that James IV was killed ‘at Bramstone upon Piperd hill’’. Stow is the only source for this. The hill is marked on the 1823 estate plan as Stock Law, and when questioned about ‘Piper’s Hill’ in 1858 the 70-year old churchwarden (Robert Rankin) said he had never heard of it! The name was first applied to Stock Law by Rev. Jones in the1860s as aspirations for a battlefield monument grew. He may also have been influenced by the fact that the field belonged to a sympathetic landowner John Collingwood, and was close to his church. It had become established fact by the 1900s when the existing memorial was erected (1910).